Article one, here we go!

So you like yourself, you look pretty good, even in the morning when you first get up – you’d do you. But there’s just that one thing bothering you, that stubborn little layer that is blocking your abs from popping out to say hi…

You figure.. hey here’s a good idea.. I’ll go do some crunches! really target those abs and burn the fat off those bad boys.. hello ladies…..

Exercising your abs, will not cause you to burn the fat on-top of your abs

This is not a myth, it’s a proven scientific fact with lots of studies to back it up.

In the same way endless sets of arm curls are not going to leave you with no fat around your bicep – you can’t crunch away the paunch – you can however develop a strong core and bigger abs. However, there are much better exercises for your core that aren’t going to be as bad for your back as crunches and sit-ups are.

Resistance exercise in any part of your body is not going to cause that area to burn fat before any other area.

Genetics are the main culprit responsible for where the fat comes off as you lose weight, and some people are just super lucky with those compared to others.

You know who I’m talking about – the guys who carry weight everywhere but their abs and chin – so they not only look bigger but also have ridiculous abs, and the girls who store fat in their breasts or ass – and it looks good. As jealous as that may make you, no-one has bad enough genes that they can’t lose fat from anywhere they want on their body – it just may take them longer to get to those areas they really want to target.

Well there’s a number of reasons;

the main decider of where your body stores fat is your genes. The next in line is your gender. (lots of gen’s being responsible here)

The good news is that your gender-specific fat storage is keyed towards making you more physically attractive. For example, if you’re a girl, your body wants to store fat primarily in your hips, breasts, and that wagon you’re dragging… Hang on, isn’t that three of the most appreciated areas by us men? hell yes it is. Exaggeration of those areas is caused by the storage of body fat. Evolution loves you. 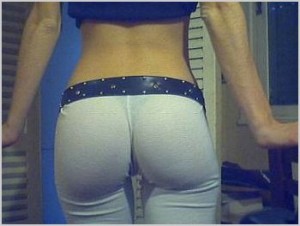 an awesome example of some great gender-specific fat storage

The third culprit in charge of where your body stores its energy reserves is bio-mechanics.

Think back to the last time you went running, whether it was recreational or you were late for the bus. Now think about your movement;

When you run your arms swing in-front of and behind you, and your legs will move up and down as they go back and forth.

But does your abdomen move? well, trick question because it probably twists and flexes slightly, but for giggles lets say no.

And your body knows this, it’s had millenia (through data stored in genes) of experience in optimizing your movements so you can run away faster from danger, and so you aren’t going to miss that bus. It stores most of your excess-energy (fat) in your midsection – away from moving parts and levers. That way you don’t waste energy hauling around heavy ass hands and feet. Think how much harder it would be to run carrying 5-10kg weights in your hands – a lot harder than if it was strapped to your chest. Plus, the stress on your joints would be much higher. Storing the body fat in your midsection is just more efficient.

So what does this mean for my 6-pack?

Not much, just that you’re going to have to work harder if you aren’t some super-gened monster. Whilst some people will do next to nothing and have abdominals that are reminiscent of a statue of a Greek philosopher, the majority of us have to work off the fat from other areas (where fat may be more desirable) before our bodies will finally go ‘f**k it, I’m young’ and start burning abdominal fat.

This can be the case with more than just the abdominal and mid-section areas, as stated before fat-storage is a lot down to your genetics, and unfortunately – you’re stuck with them.

The trick is keep going, and eventually you’re going to get there sooner or later.

Don’t they say the journey is better than the destination anyway?

Respond to 'Fat loss: The sit-up and crunch syndrome'

Dan is the Editor/Designer/Developer, and Main Author of liftingthebar.com. His knowledge is gained through forum haunting and an active intrigue into all things fitness and nutrition based with a scientific grounding. When he isn't working on passion projects, or in the gym - he's selling himself trying to make it as a freelance web developer.